Where do West Indians Live in Hartford?

When Did They Arrive?

While there is a large population of foreign born West Indians in the Hartford area, the majority of them entered the U.S. prior to 2010. This data came from the 2015 American Community Survey conducted by the Census Bureau. 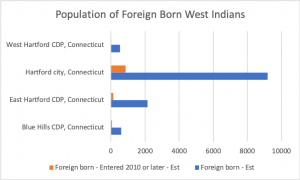 Patois is a dialect of English that has its origin in the days of slavery, when West Africans, the English, Homesteaders from Ulster & Scotland had to figure out how to communicate. Click here to learn more about Patois and its origin.

“Black children are failing to make the same progress in school as their classmates because teachers don’t understand the value of the Caribbean patois they speak and see it only as broken English, according to campaigners.“